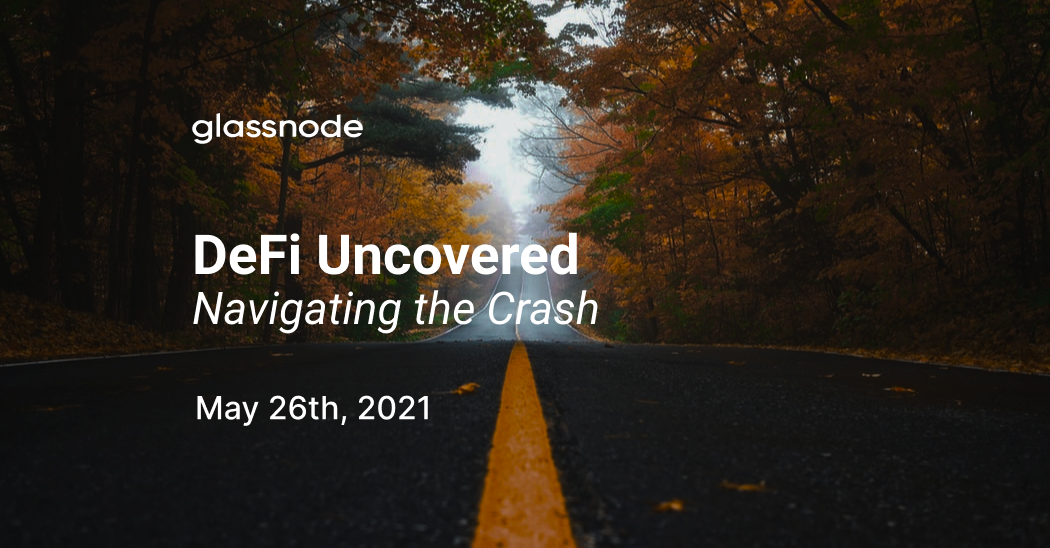 In this report we cover:

Total value locked in smart contracts has fallen 42% peak to trough, moving generally in line with the price of Ethereum, which fell 51% peak to trough.

With heightened volatility, DEX volume rocketed to all-time highs. Record volume of $11.7B was set on May 19th amid selloff. Uniswap dominated with $5.7B in volume on $5.8B of liquidity, while Sushiswap was in a dominating second position at $2.8B on $3.5B of total liquidity.

Lending protocols have shown strength, with value locked staying strong and liquidations staying at a minimum. Loss of stablecoin peg is a key risk for borrowers during a market crash. Collateral requirements are more difficult to meet as prices become more volatile. Additionally, volatile collateral, liquidations, and varying levels of utilization can create volatile interest rates. Volatile rates can lead to further withdrawals from borrowers. Fortunately, stablecoins stayed healthy, utilization stayed healthy, and lending markets overall behaved as intended during periods of high volatility. Over the course of the crash, 415 borrowers faced liquidation events on Aave for $38.4M liquidated.

Rates stayed healthy throughout. As lend and borrow roughly stayed correlated the utilization rates stayed similarly healthy. The timeline for most lending markets played out as follows:

Major stablecoins have healthily maintained their peg throughout the crash. None of the top 3 stablecoins used on Ethereum drastically deviated from their peg for an extended period of time, letting sellers confidently exit as they saw fit to stablecoins. The most drastic USDT/USD spreads on major exchanges were peaks around $1.02 and troughs around $0.99. These wicks only lasted a few seconds to minutes in most cases. Otherwise, stablecoins held their peg for the majority of the crash with volume weighted average prices (VWAP) staying at $1.00 the majority of the time. Contrary to the March 2020 crash, DAI held its peg impressively strong.

This was especially positive for DeFi because of the performance of DAI during the crash. DAI held its peg well, circulating supply adjusting accordingly in response to collateral requirements and protocol stability. As redemptions were claimed by collateral holders, collateral was reclaimed and DAI removed from supply. This behavior allows collateral to stay healthy, liquidations remain at a healthy level, and DAI maintain its peg.

Unfortunately, one stable of relatively strong adoption (~2B circulating supply) failed to maintain its peg. TerraUSD (UST) lost its peg on the 18th as the value of its collateral from LUNA fell below that of the stablecoin it collateralizes. The LUNA/UST ecosystem currently suffers additional risk, partially due its market size. Whereas the DAI/MakerDAO ecosystem commands greater than $8B in ETH collateral for a $5B DAI supply, UST’s $2B supply skated close and at times below its roughly $2B in LUNA collateral. Fortunately, loss of peg was not too severe for the duration of the crash.

Loss of peg in UST simultaneously caused unhealthy behavior in its lending market Anchor, positions were more prone to liquidation in the protocol’s native lending platform where UST sees large demand. Its peg has largely rebounded since the crash as LUNA’s value has pushed back above UST.

Percentage of Ethereum supply locked in smart contracts has remained very healthy, with 23%+ of the supply remaining in contracts throughout the duration of the selloff. Supply on exchanges jumped from 11.13% to 11.75%.

While we’ve seen a narrative shift this year in valuing DeFi against the dollar, ETH remains the reserve currency and benchmark of choice. DeFi/ETH has largely underperformed in 2021, with no exception during the crash as some view ETH as a flight to safety.  This has expressed itself in ETH’s strength against DeFi during the crash. However, this decline expresses itself less sharply among the highest market cap blue chips like UNI, AAVE, and MKR, who post crash have only seen ~6.5% excess market cap weighted dips against ETH.

It is possible that we see a potential decoupling from ETH/DeFi among those blue chips who show increased usage, revenue, and strong incentives amidst token prices in either direction. However, these softened declines among blue chips do not match that of mid-cap DeFi where relative declines are more than 15% larger. And during bearish sentiment correlation almost always creeps higher.

Zooming out, ETH/BTC showed resilience during the dip. In previous crashes risk has traditionally fled out of ETH to BTC, with ETH experiencing significantly larger drawdowns. This time around, the tune changed, with ETH remaining higher beta to BTC, but not by much. As ETH shows resilience to market declines over time vs BTC, it is possible DeFi participants flee to ETH as strength instead of BTC and stablecoins.

Blue chip DeFi governance tokens have unsurprisingly sold off, with max drawdowns of 75%+. These are nascent tokens with high Ethereum beta, limited liquidity, and a small numbers of holders. It should be no surprise that broad-based market volatility sends these tokens downward. In recent history an interest in pricing these assets against USD instead of ETH has taken hold.

More and more investors in DeFi are approaching with traditional valuation metrics to understand these assets. Assets owned by the treasury, cash flows returned to holders, and other popular valuation metrics are becoming attractive in recent history, especially when benchmarked against other growth assets.

Here we introduce Price / Sales Ratio (P/S Ratio), the measure of token market cap divided by revenue generated by the protocol. It is unclear thus far whether revenues are a driver of token prices this early in DeFi’s adoption curve. Willingness to bet on future revenues and narratives is just as strong as existing adoption in many cases. However, projects with the highest usage are quickly trickling to the top and bouncing strong off lows.

We’ve seen TVL continue to act as a strong driver of price, with the two highest TVL protocols experiencing the softest drawdown from ATH. They also saw the strongest bounce off lows, alongside Uniswap and its dominant user base. Unsurprisingly, these TVLs are mostly correlated with market cap. The larger cap DeFi projects have led during the dip with stronger liquidity lessening the blow.

When grouping these tokens by protocol type, we see interesting trends occur as we compare relevant metrics. In the following chart we dig deeper into smaller cap assets in DeFi against our blue chips by protocol. We see how dominant Uniswap remains despite its persistent limited incentives and use for the governance token. As Uniswap v3 flips v2, the trend only grows stronger. UNI and SUSHI’s clear dominance has lent to softer drawdowns and stronger relief. Bancor has additionally shown strength among heightened revenue and a healthier price to sales. While Curve’s market cap appears small, it’s FDV exceeds $5.5B.

In lending we get an interesting story when viewing baseline valuation metrics. Compound’s valuation appears low, especially relative to Aave. We see TVL continuing to inflate on Aave above its competitors, largely due to new incentives and acting as a popular hub for alternate forms of collateral. Especially during crashes, diversification of collateral can be healthy for preventing liquidation. For example, Aave keeps about $200M in xSushi locked, $500M in LINK, and more than a dozen other non-standard assets boast >$5M locked as collateral. That said, Compound boasts a healthy lending market with steady rates and strong reward incentives.

Interestingly, the pricing out of retail was seen through a steep drop in total number of trades but dramatic increase in total volume. Many were forced to sit on their hands, for better or for worse. If a trader wants to offload $3,000 in risk but gas prices are >$700/swap, it’s unsurprising they choose against making the trade. For larger traders, $700/swap is relatively easy to stomach if the position sizes are 100x or greater the size of fees. As the crash ensued, volumes went way up as larger holders moved risk. Total transactions fell as smaller traders were priced out of taking any actions on-chain.

A few days after the crash, gas prices have since fallen considerably. Gas consumption from stable transfers has fallen by >60%, Uniswap gas consumption has fallen about 50% from the peak, and opportunities for arbitrage have mostly returned to normal levels since the crash. Peak mean Gwei of 1200 put cost to transact in excess of $500/swap throughout the crash. At <75 mean Gwei, smaller traders can now rebalance as they see fit.

DeFi was hit with one its first major price and liquidity tests since growing TVL and users to $100B+ and 2m+ respectively. Positive indicators of continued growth of DeFi include:

The biggest warning sign going forward would be a decrease in usage and a corresponding dip in revenue from protocol fees. We’ve seen no such event thus far as heightened liquidity has increased usage and fees. Dips in usage could cause liquidity to dry up as TVL/revenue increases and returns are purely driven by token inflation. Loss of liquidity worsens the user experience, creating a reflexive effect of even lower users, lower revenue, and more exit of liquidity. For now, growth remains strong and usage of DeFi propels to new heights.

To keep up to date with the latest Glassnode analysis of the DeFi ecosystem, be sure to subscribe to this new content series below.